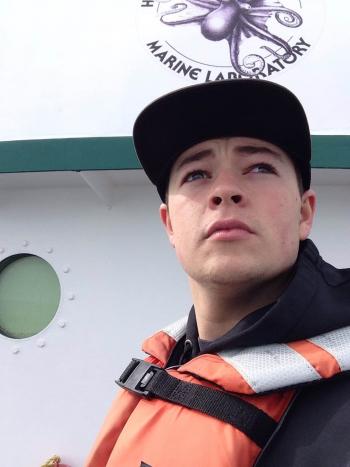 "I can see myself doing this for life. I really love the opportunities Humboldt has for my major."

Starting off in college:

Jake Cupp arrived at Humboldt as a freshman Biology major with a Cellular Molecular Emphasis. During Jake’s first semester at Humboldt, he struggled to adjust to the level of academic expectations of college. He heard about academic support services available on campus, but wasn’t sure about using them. When asked about his struggles, he said, “I knew that my college education was important to me because it shapes my future.” He spent the spring semester on academic probation, working closely with his academic advisor to identify and seek out academic support resources on campus. He learned about grade forgiveness, and resolved to take CHEM 109 again, using his initial failure as a growing and learning experience.

While he honed his academic success strategies, Jake worked with his academic advisor to reflect on his major choice. Marine biology had always been an interest of his so he took Oceanography 109 to explore a bit. He found his passion there, in voyages aboard the RV Coral Sea, sampling sea water and considering the implications of pH, temperature, and more.

In consultation with his advisor, Jake tried out several different academic success strategies including:

His advice to other students: “Utilize everything possible including office hours, math lab, tutoring groups from the Learning Center. Get to know your professors and work through your struggles. Don’t overload yourself with units, and prioritize your time.”

In his second year, Jake took CHEM 109 again and earned an A! He discussed his interests and strengths with his advisor, and developed his academic plan and changed his major to Oceanography.
When asked what he learned from his experience, Jake said, “Good things will come when you set your goals and reach out for help.”
Humboldt State University